A large insurance company wanted to improve the process for recruiting case managers and ultimately drive better results across the organisation. Case managers made up the majority of the business and, as a result, represented a high-volume recruitment effort. This organisation wanted to supply data-driven insights to their recruiters and hiring managers while offering a candidate friendly experience that would increase completion rates.

Criteria then conducted a study with the organisation to identify the relationship between the assessments and a couple of important outcomes for the case managers, including job performance and retention.

The study included results from over 500 case managers.

The study found that both assessments were associated with better performance and retention outcomes.

Case Managers who received a score above the 50th percentile on Emotify were much more likely to be rated as a high performer.

The assessment scores were also related to employee retention. The study analysed the difference between employees who were still at the company compared to those who had involuntary resignations.

For both Cognify and Emotify scores, current employees scored 9 percentage points higher on average than those who ultimately were involuntarily terminated.

This difference increased even more when the two scores were combined into an overall Suitability score. Current employees scored 13 percentage points higher on the Suitability score than those who were involuntarily terminated.

In addition to performance and retention outcomes, the organisation was also able to optimise the recruitment process by increasing the completion rate for their assessments. By reducing the total assessment time by 15 minutes, the company was able to increase candidate completion rates from 71% to about 80%, without sacrificing the predictive value of the assessments. 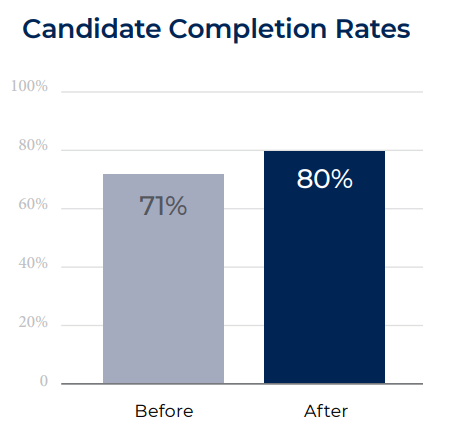